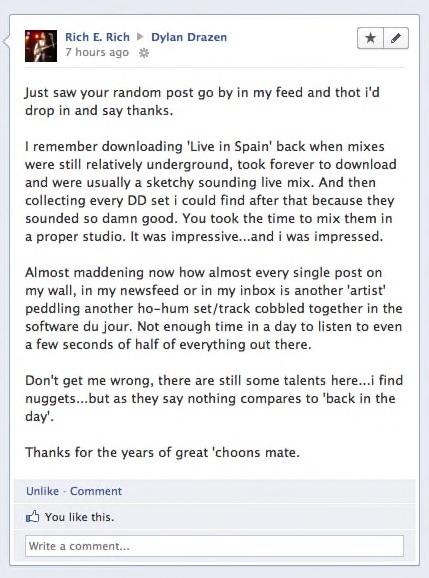 I’ve always regretted that I wasn’t quite old enough to enjoy disco as an adult, but when I hear tracks like this I realize what an influence songs like these have had on my taste. Three words, Donna: dripping with emotion. We will miss you!

I’ve been doing a lot of thinking lately about this whole sync debate, but more so about the evolution of the DJ, technology, and how it relates to myself as an artist.  Maybe I should start by describing my own evolution as a DJ.

It started in 1993, when I bought my first turntables and began to buy vinyl.  Those days all DJs played on vinyl.  In 1997 after having DJed on college radio for four years and playing in raves across the country, I decided to share some of my DJ sets online by encoding them to low bitrate MP3 files, hoping the rest of the world would hear.  The digital revolution began some years later and many DJs left vinyl for CDs.  My friends and I would complain all the time about the harshness of the digital sound.  Today’s sync debate was yesterday’s analog vs digital war.  But over time digital won, due to its lower cost, wider availability, and convenient nature.  From 2003-2006 my sets were comprised of a mix of vinyl and CDs.  It was cool to be able to play tracks out that someone had sent me just hours before.  But my bread and butter music was still the vinyl I’d buy in the stores in NYC.  Throughout the 2000s I’d use my faithful Cycloops sampler to fire off loops live.  This cute little hardware box was certainly a sign of things to come.

I bought my last piece of vinyl in 2006.  From then until today, my live sets were performed exclusively with CDs.  But to be honest I never got that fulfillment playing with CDs as I did when I was playing vinyl.  With vinyl I was literally feeling the music and it certainly came out in my sets.  The work involved with preparing my CD sets was miserable.  I’d make playlists in iTunes to decide on how I’d author the CDs.  I’d painstakingly print the track lists onto the CDs along with art from each release which I diligently culled from discogs.com, because I couldn’t fathom playing sets of tracks scribbled on a disc.  Growing up with vinyl and artwork, my brain recognizes titles and brands from a visual point of view.  Anyone who saw my CD books thought I was insane.  More like passionate, with a dash of OCD.

Once my CDs burned, books populated and organized, I was armed with more music than I could have ever imagined bringing in a record bag, having been limited to less than 100 tracks per gig.  The convenience of digital acquisition was balanced by the hard work required to prepare and organize CDs for a proper set.  Add to that the fact that I play multiple genres only made things that much more complicated.  And so you can see how the idea of effortlessly accessing my entire library on stage was an attractive idea just on the horizon.

So in 2005 I took the plunge and decided to buy Serato Scratch Live.  My thought process was that I wanted to get to know the digital DJ setup, but for studio use only, and maybe for the occasional local residencies when I was very much aware of the technical setup.  I still did not trust a computer to deliver my music when the stakes were high, nor did I appreciate the complexity of setting up and breaking down a “scratch style” box during gigs, interrupting the DJs before and after me.  Too much stress and too many variables.  I’ll take my tangible media, thank you, and do the best I can with it.  For a good chunk of years Serato served me very well for my studio mixes, but I rarely brought it out of the house.  In 2009 I retired Serato in favor of Ableton Live for the studio mixes, and I became spoiled rotten with what Ableton could do in the mix.  I loved it, but it was for studio use only.  I would still refuse to use Ableton on stage, stubbornly sticking to CDs for live use.  And now we have a discord.

Indeed, by 2006 many DJs in Europe were already performing their live sets using Ableton.  Some close friends were egging me on to follow suit, trying to convince me that I could create so much more live on the computer than I could ever do with a few decks and a mixer.  I’m funny that way; I might like to be on the bleeding edge embracing new technology, but when it comes to art and performance, I tend to be a purist.  So then you might ask, why didn’t you just stick to vinyl, even through today?  New tracks are still pressed on vinyl.  And my answer to that would be, because that would simply be pathetic.  Sure, the aural quality of analog can never be beaten, but something must be said for staying current with technology, trends, and not getting left behind.

So for years I have felt “stuck” in this world of DJing with CDs, knowing full well that there was a ton of new technologies being developed all the time.  I dragged my feet for a long time with this, steadfast in my belief that a “DJ” is someone who spins records or CDs and beat matches manually.  But let’s be honest; one of the biggest reasons why I’ve been so reluctant to go with a technology that does not require beat matching is because of how proud I am of my beat matching skills.  I was 16 when I first heard a DJ mixing two records together.  It was magical.  I remember the moment with such clarity, and I knew with equal clarity that I wanted to dedicate my life to this very thing; matching beats.  It sounds silly on paper, but in the mind of a 16 year old it’s very serious. Add to that the music during those years was so heavily and obviously influential on my formative mind that I had a very difficult time decades later letting go of the beat match.  After all, this is what I was put on this earth to do, right?  Maybe.

Over the years one of the most common questions I’d get asked by curious outsiders was, “So what is it that you actually do on stage?  Are you just playing one record after another?”  And I’d do my best to explain what it was that I did.  But now I’m the one asking this very question.  What is it that a DJ does?  What do people expect of the DJ?  A guy on stage who plays tracks, even well, just isn’t enough anymore.

After moving to Miami and attending the Winter Music Conference for the first time in ten years, I saw what DJs on this side of the pond were doing.  Nobody was playing vinyl, some were still playing CDs, but most were using Traktor and either an X1, S4, or a Scratch box.  Suddenly I felt like grandpa with my book of CDs.  The moment of clarity hit me again, only it’s 20 years later.  I’m in the lobby of the Whitelaw Hotel in South Beach, and this kid pulls out an S4 and is doing things that blew me away.  He’s picking loops on the fly and throwing in samples.  He’s choosing custom effects and is working four decks at the same time, all the while not breaking a sweat.  Just as the day I first heard a DJ matching beats in 1991, I thought to myself, yeah, I can do that.  I will do that.  A week later I did my research and settled on a Traktor Kontrol S4.  Phase 3 of my DJ career is in the works, and I’m excited to finally be shedding this grandpa CD skin that has been so overdue to go.

And finally we come to the actual subject of my post, and that is about Sync.  Why is everyone so up in arms about it?  I know why, because I’m one of those guys who’s so proud of the skills that he has, and is equally threatened because this one skill that he’s had and championed for two decades is now obsolete. “Real DJs match beats.”  It pains me to say it, but this statement is now bullshit.  This purist is now excited to be able to free my mind from babysitting a mix and taking advantage of some very mature technology, and do things on the fly that would take me hours to perfect in the studio using Ableton, and impossible to do on stage because I’d be busy keeping the mix smooth.

I’m watching one training video after another on YouTube, and see that some DJs turn sync off because they want to show the world that they can match beats. Get over yourselves, and let this new technology into your soul.  While you’ve got sync turned off proving you can match beats, the rest of the world has sync turned on and they’re doing some very creative things you’re too stubborn to let yourself get into.  Want to be lazy and keep sync on but not do anything creative?  Fine, you’ll get left behind too.  Yes it’s true, “anyone” can put together a DJ set and the computer will match the beats for you.  But the computer doesn’t have taste, the computer can’t read a crowd, the computer doesn’t know when to inject some wicked Salsoul acapella over that breakdown.  It might analyze your tracks and tell you where the first beat goes, but it doesn’t care if that Jerome Sydenham track meshes well with the latest sickness from Rawthentic.  It just does what you tell it, just as you used to tell what your vinyl to do.

I’m excited for the future. Let’s get with the program.